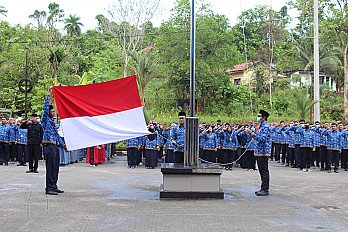 n commemoration of the 51st Anniversary of the Republic of Indonesia Civil Service Corps (KORPRI), Samarinda State Agricultural Polytechnic (Politani) held a ceremony at the Politani Office Yard, Tuesday (29/11/2022). The ceremony was led directly by the Director of Hamka, S.TP., M.Sc., MP, attended by all members of Korpri within the Politani scope, including lecturers, PLP, administration, security guards, and cleaners (cs) in the Samarinda Politani environment. At the event, the Director of Politani, Hamka had the opportunity to read a written remark from the KORPRI Advisory to the Ministry of Education, Culture, Research and Technology, Ir. Suharti, MA., Ph.D as in front of all ceremony participants.. Commemoration of KORPRI's 51st Birthday in 2022 has the goal of inviting KORPRI members to improve their performance, especially in the field of public services and concern for the community in accordance with the theme that is being carried out this year, namely "KORPRI Serving, Contributing and Innovating for the Nation". written from the KORPRI Advisor stated that KORPRI is a forum consisting of ASN, for ASN, and by ASN. Therefore, KORPRI has a role in supporting ASN in carrying out their duties as state administrators. On this 51st anniversary, it is hoped that KORPRI (especially within the Ministry of Education and Culture) can play a more active role in supporting employees/employees. The challenges we face are constantly changing. Therefore, KORPRI also needs to adjust, especially in providing relevant support to ASN. At the KORPRI IX (ninth) National Conference yesterday, there were 4 (four) main KORPRI programs that had been established, namely: 1. Improving the quality of public services and digitizing the bureaucracy. 2. Strengthen the ideology and character of ASN. 3. Career Protection and ASN legal assistance. 4. Increasing ASN welfare. These four programs are proof that KORPRI wants to be more useful for the community and all ASNs who are its members. Like other professional associations, KORPRI also needs to become a forum for exchanging ideas for members so they can innovate, learn new things, and be more critical in responding to problems faced by society. Problems that arise now and in the future demand a higher bureaucratic capacity. We need to find ways to serve society faster, better, and cheaper. Therefore, like it or not, we must actively play a role model and uphold ASN values, namely service-oriented, accountable, competent, harmonious, loyal, adaptive and collaborative. Apart from that, we must also uphold the value of tolerance, banish radicalism-fanaticism, and prioritize the livelihoods of all people, not just a few groups. HAPPY 51st ANNIVERSARY OF KORPRI! "ASN is united, KORPRI is tough and Indonesia is growing". The Flag Ceremony this time was also coupled with the handing over of mementos to Mr. Setu, the employee who were completed the duty or retired. The release of retired employees was symbolically delivered by the Director of the Samarinda State Agricultural Polytechnic accompanied by the Assistant Director II for Finance and Personnel Affairs, Eva Nurmarini S.Hut., M.P. The award ceremony and retirement ceremony were held as a form of appreciation and the highest appreciation for employees who have dedicated themselves. A big thank you to retired employees for their dedication, service and dedication while serving as employees at Politani Samarinda. In conclusion (Humas/AL) 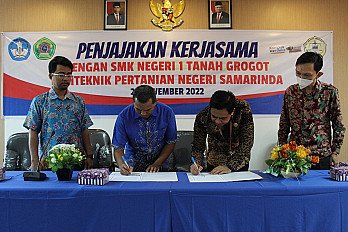 25 November 2022 coinciding with National Teacher's Day, Samarinda State Agricultural Polytechnic received a visit by teachers from SMK Negeri 1 Tanah Grogot, the presence of this group was for hospitality and collaboration to realize and develop competency-based Vocational High Schools (SMK) such as accepting students to do Street vendors and human resource development, this collaboration was outlined through the signing of a Memorandum of Understanding (MoU) with Tanah Grogot 1 State Vocational High School in the senate meeting room 2nd floor of Politani Samarinda rectorate Jl. Samratulangi, Gunung Panjang Campus, Samarinda Seberang Friday (25/11/2022). This MoU was signed directly by the Director of Politani Samarinda Hamka S.TP., M.Sc. MP., with Vice Head of Public Relations Puji Laksono accompanied by Deputy Head of Curriculum Syaiful Anwar witnessed by a number of Tanah Grogot 1 SMK teachers, deputy directors, and heads of departments. In his remarks, the Director of Politani Samarinda, Hamka, welcomed this collaboration and invited us to work together to help achieve the advancement of vocational education, because we are both vocations, said Hamka, "we are ready to facilitate student activities related to the use of existing educational support facilities at the Samarinda State Agricultural Polytechnic to conducting street vendors, apprenticeships and so on for the sake of human resource development” he added. Meanwhile, Puji Laksono expressed his gratitude for the warm welcome from the Director of Politani Samarinda and his staff for their arrival and hopefully with this MoU there will be good cooperation and many positive activities that can be carried out for human resource development at SMK Negeri 1 Tanah Grogot to strengthen vocational education in Indonesia. He said After signing the MoU, the activities continued by visiting the laboratories at Politani Samarinda, namely the Plantation Management Laboratory, Geodesy Laboratory, Garden Laboratory, Production Laboratory, Agronomy Laboratory, Computer Network Laboratory, Soil and Water Laboratory, Analytical Chemistry Laboratory, Plantation Product Processing Laboratory, Lab. Palm Oil Processing and Laboratory within the Department of Forest Product Technology. (Humas/AL)

Visit of National Library of Indonesia Team to Politani Samarinda 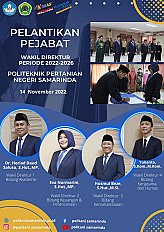 The Inauguration Ceremony and Oath Taking of the Deputy Director (Wadir) of the Samarinda State Agricultural Polytechnic (Politani Samarinda) took place on Monday (14/11)   at exactly 10.00 WITA  in the senate meeting room on the 3rd floor of the Politani Samarinda Rector. This inauguration was attended by the Director of the Samarinda State Agricultural Polytechnic, Deputy Director for the 2018-2022 period, Chair of the Senate, Head of Department, Head of Section and Head of Subdivision, Head of Study Program, Head of Center, Head of Public Relations, Personnel Staff, Chair of Dharma Wanita. The inauguration and oath-taking were carried out directly by the Director of the Samarinda Hamka State Agricultural Polytechnic, S.TP., M.Sc., MP., accompanied by clergy from the Regional Office of the Ministry of Religion of East Kalimantan Province. In his remarks the Director of the Samarinda State Agricultural Polytechnic, expressed his highest gratitude and appreciation to the Deputy Directors for the 2018-2022 period for their dedication and contribution to achieving their performance so far in efforts to develop the Samarinda State Agricultural Polytechnic better and more developed. Hamka also congratulated the appointed officials and hoped that by being re-elected as deputy director for the 2022-2026 period he would again carry out the mandate of carrying out and assisting the director's duties for the next four years as mandated by the Minister of Education, Culture, Research and Technology and advised him to continue programs that are still pending, continue to maintain and continue to foster a better campus atmosphere. The deputy directors who were appointed for the period 2022-2026 namely 1.   Dr. Heriad Daud Salusu, S. Hut., MP. as Deputy Director for Academic Affairs 2.   Eva Nurmarini, S. Hut., MP. Finance and Planning Sector 3.   Husmul Beze, S. Hut., M.Sc. Student Affairs 4.   Yulianto, S.Kom., M.MT. Cooperation and Public Relations. The election of the four Deputy Directors was based on a decision and the Director's choice approved by the senate, where the four deputy directors are the same deputy directors for the 2018-2022 period whose performance has proven to develop Politani Samarinda. Good job, I hope you can carry out the trust well. (Humas/AL). 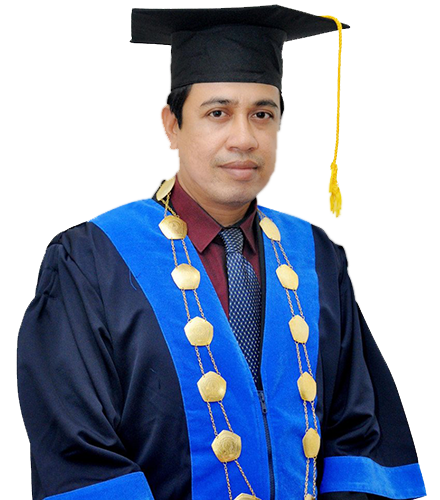 Message from Director of the Samarinda State Polytechnic of Agriculture

Students excel in education and competitions

Industrial Cooperation as a supporter of campus advancement

Building cooperative connections between campuses and companies in the fields of agriculture, plantations, forestry, remote sensing, and information technology in order to create a modern campus that is in line with the times